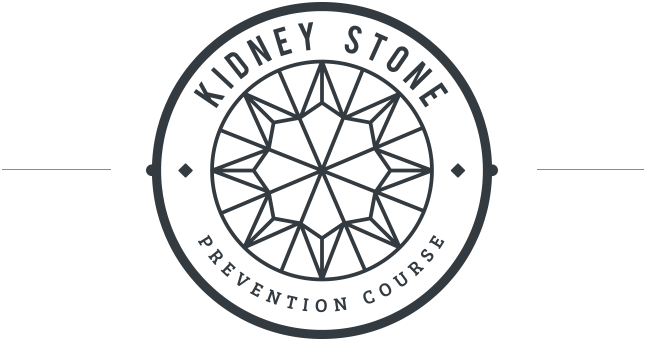 Learn how to prevent kidney stones and enjoy life again.

Kidney stones are a complex and chronic disease, but it’s also manageable and even preventable in up to 80% of cases. Join me and I’ll show you exactly what you need to KNOW and DO to avoid forming stones.

Watch my video to learn more!

When you purchase the Kidney Stone Prevention Course…

Five times a week for one month, I will host a live group teleconference call where I will answer your questions and give you specific advice based upon your medical and dietary needs. By the end of this time together, you will have a customized prevention plan to reduce your kidney stone risk, a healthy overall diet, and you will for the first time be in control and ready to take your life back!

I am practically giving this program away because I want to help as many people as I can!

What your videos will teach you.

The Importance of 24 Hour Urine Collections

How to Lower Your Sodium​

How to Increase Your Calcium

How to Lower Your Oxalate

“Thank you so much for all the information that you provided. I learned more in 6 weeks than over the course of 20 years in dealing with kidney stones.”

“It can be a daunting task for patients to follow a low salt and low oxalate diet, especially if they suffer from other conditions that often necessitate eating foods that are high in oxalate. Jill Harris has the experience and communication skills to help people solve often complex dietary dilemmas. I highly recommend her.”

“I enjoyed the class so much and learned a lot! It was fun to interact with others and hear about the various issues affecting us all. Thank you for your dedication, sense of humor, and expertise.”

$189.00 for 5 videos that you can access for life. You also can get access to my calendar and sign up for LIVE Q and A’s to help you after you are done watching your videos.  You get up to 20 live sessions with me valued at over 1,300.00. Can’t beat that!

Not all stones can be prevented, but the majority can be. Even if you make a type that is considered rare, you will still benefit from the course. The information given will help educate, empower, and motivate you to learn how to reduce your current stone type. And teach you good eating habits for general health!  Most lose weight too!

You do not need to do a urine collection to make use of the education provided in the course.

Whether you have been given a treatment plan or not, the course is designed to show you how to incorporate more fluids and healthier foods into your lifestyle that will help curb most stone formation. It will also help you understand what you should be asking your doctor and how to navigate doctor visits in general so you can do everything necessary in order to be prescribed a treatment plan.

Many patients try to implement treatment plans on their own. However, many times you don’t know what you don’t know. This course will break down how to really follow a low salt diet, what to do when you go out to eat, what oxalate list is the right one, and how do you really get all these changes straight. This course is designed to leave no stone unturned. Sorry, bad pun!

I have over 15 years of experience helping thousands of patients understand and adhere to their physician’s kidney stone prevention plan. I educate you on why you’re getting stones, how to change your diet, and how to navigate doctor visits.

I pride myself on making this a fun and doable experience. While working with me, my clients drastically reduce their kidney stones, if not stop making them altogether.​

Stories you may relate to.

Tim came to me and was in despair. He had met with his urologist many times, but was still suffering with chronic stones. Over the years he had had 5 lithotripsies and many stents. He’d been on antibiotics on and off for several years due to urinary tract infections.

He’d suffered with such excruciating pain, he was afraid to travel. His doctor told him to stop eating all green, leafy, vegetables, and drink at least one gallon of water per day.

Along with his kidney stone issues, Tim has high cholesterol and changed his diet following his cardiologist’s advice. By the time he got to me, he was frustrated, angry, confused, and wanted to give up.

His first sentence to me was:

“I thought I was being healthy. I changed everything for my cholesterol, lost 13 pounds, felt great, and now I have kidney stones and my urologist says it is because I am eating too many veggies. What am I supposed to do now?”

Doug, who is 56, has made stones on and off since he was 32. He is a salesman who takes clients out to eat frequently, travels with pain medication “just in case,” and tries his best to drink more water like his doctor has told him to do during each visit.

He is 50 pounds overweight, has high blood pressure, and doesn’t understand why he keeps making new stones.​

“I’m drinking all that I can and I rarely have to use the bathroom. I don’t understand it. My doctor told me to drink, and I am, but I still make stones. I am missing work because of all the surgeries and my boss is getting less tolerant of my absences. I don’t know how much more I can take of this and I am afraid I am going to lose my job.”

Susan had one kidney stone and the pain and surgery related to it was enough for her to seek out help immediately. She did a 24 hour urine collection, went over the results with her doctor, changed her diet and she didn’t get another stone for nearly a year.

Right around 5 months after changing her diet, thinking she was “in the clear,” she slowly started adding in some old foods. Before long, her diet reverted right back to where she started when she made her first stone. By year’s end, she was headed back to the ER for intense pain. She had formed another stone.

I have educated all of these people – people just like you – on how to drastically lower their risk of forming new stones. It is possible. Come learn how.